This article operates on two premises: 1) that contemporary practices of intensive industrial livestock farming are producing catastrophic ecological effects, and 2) that, in the capitalist drive for maximum productive efficiency and the absence of effectively enforced animal-welfare legislation, industrial meat producers currently inflict atrocious abuses on animals on a historically unprecedented scale. Taking a cue from Michael Pollan’s proposal of glass-walled slaughterhouses as a remedy for the presently unchecked brutality, I examine a text that would appear to offer extraordinary insight into a highly secretive operation: a contemporary documentary film shot primarily in a Mexican cattle slaughterhouse yet circulated internationally, screened for the Mexican Senate, and nominated for a U.S. Academy Award. My argument is that, like the makers of previous slaughterhouse documentaries, La Parka director Gabriel Serra overcame the taboo against showing real animal slaughter in large part by evading consideration of the crucial ethical and political implications and by claiming to represent the slaughter of non-human animals as a metaphor for human suffering. I analyze Serra’s apologetic and solipsistic humanist rhetoric and the specific technical devices by which he structures his film as a “character portrait” of a saintly slaughterer, seeking to absolve him of moral responsibility having stunned or killed close to four million animals in the course of a twenty-five-year career. I argue that the intended justification of industrial slaughter is undermined by various textual contradictions, including the protagonist’s own comments on his persistent feelings of guilt, his evidently traumatized state, and the sheer power of images of animal killing, which various film theorists have interpreted as unique in their ability to resist metaphorization and rhetorical containment.

Glen Close is Professor of Spanish at the University of Wisconsin-Madison. His most recent book is Female Corpses in Crime Fiction. A Transatlantic Perspective (Palgrave Macmillan, 2018). His current research is on the aesthetic and rhetorical uses of images of animal death in slaughterhouse documentaries. 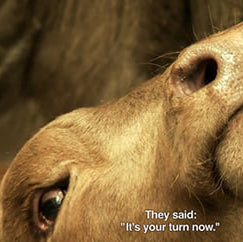